Women have dominated the cosmetic industry for years. But, men are finally allowing themselves to access products that make their skin healthier, complexion brighter and feature’s more defined. Male beauty brands & manufacturers have been producing hair, skin and body products for guys for years. Men have been slower to embrace the idea that make-up can be designed for men, but could times be about to change?

Throughout history, men have worn makeup. Makeup was worn by both sexes 7,000 years ago in ancient Egypt. In ancient Rome, women wore special makeup depending on their social status. The higher women rated, the more makeup they wore. Roman men showed their status in the types of clothing they wore. It is fair to say that makeup was an important part of life in countries like China, Persia, and Japan. Unfortunately throughout the years, these religious and cultural influences on men wearing make up, have decreased. We’re still at a point where make-up isn’t seen to be appropriate for men. However, we’re confident this is about to change.

Entertainers, newsmen, talk show hosts, and their guest wear makeup currently. They have for years and they’ve never hidden the fact they did either.

The use of make up in these industries is to even skin tone and prevent the lights and cameras reflecting off peoples oily faces. Nobody wants to watch the news with bright lights bouncing off of a shiny head or nose. People find this an acceptable reason to wear cosmetics. However, men are sometimes reluctant to wear makeup as they believe that it is not manly.

Interestingly, the same excuses were given when it came to wearing jewellery in the late 1980s and early 1900s, in particular earrings. Now, fast forward to 2019, it is common for a man to wear earrings. Guys are even rocking nose and lip piercings now, without anyone batting an eyelid. Now guys have a wide range of products to pick from; facial creams, body washes, and hair products that are marketed specifically to men. Just as these products made their way into the life of an average man, makeup will be allowed or even expected in the near future.

Wearing makeup or not wearing makeup does not lessen your capacity as a person, or a man. Makeup products made specifically for men has helped the cosmetic industry run a multi-billion pound affair.

Men are taking the time to learn how to strengthen their masculinity with makeup. Contouring the skin brings out prominent jaw bones or cheekbones. Eyeliner and some shadowing can make the eye appear bigger or smaller. The skin should glow and be healthy. 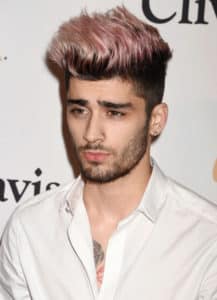 Men feel the same way about fashion and cosmetics as women do. They want to enhance their features and look and feel their best. It is not about a man feeling masculine or a woman feeling feminine. It is about using products to help cover things we don’t want seen, and to make the most of what we were born with.

Men and women have allowed themselves to evolve. Both sexes dye their hair. Sometimes this is done for a change or a fresh new look. In the majority of cases, it is to cover grey hairs or to show off the latest hairstyle. Zayn Malik is always experimenting with different hair colours and he is one of the biggest influencers for men’s style and fashion. Guys no longer have only the option of black. Men are highlighting, streaking, and even dying their hair the colours of the rainbow.

Men are learning about their health and are making their own choices about what they will or won’t do to stay healthy. They are slipping into the world of essential oils from Made With Oils, that will naturally refresh and rejuvenate them.

Men’s fashion is no longer restricted to boring styles. There are fresh and new men’s styles rolling out every year. Men have a wide variety of jeans that can be paired with a flannel shirt or a button down in pale pink. The lines of sexism are blurred. Men have taken their position in the fashion, hair, and cosmetic industries. They know what they want, and they make it happen.

It is this freedom of expression that has men standing up and saying no more discrimination. They are stating, “If her complexion can appear to be flawless, so can mine.”

Industry leaders have seen the curve and they have met the challenge. You can buy men’s makeup online or in major department stores.

Gender equality has made progress. People are no longer letting the industry squeeze us into a square hole. We are healthy and beautiful and all want to keep it that way in 2019.

If you want to see someone who wears make up in their everyday life, we definitely recommend checking out Carl Cunard’s Youtube channel and his everyday, natural make up look in the below video.